It seems odd to me that a deck as cute and sweet as the Old English just isn’t doing it for me right now. Maybe it’s because I have enough “cute and sweet” going on and something a bit more gothic is what I need to provide some balance.

That said, despite my interest in things gothic (I love gothic literature), I don’t own many “dark” decks. I do enjoy the Bohemian Gothic deck by the Magic Realist Press, as well as the Lasenic, and the wonderful, whimsical yet very, very, creepy Tarot of the Secret Forest. The Secret Forest tarot, incidentally, is often-maligned because of its odd backs, that show an altered black and white version of the card, rather than a traditional back. (It’s easy not to be put off by this. When you shuffle and deal the cards, just don’t look!).

It isn’t the first deck to be based on the writings of HP Lovecraft, nor is it the darkest deck on the block. In a way I’d almost describe it as grotesque, in the traditional sense of the word, that refers to something that both repulses and amuses you. (Something that the so-called “dark decks” often do, unintentionally, anyway!) It’s got an aura of mystery and magic that harks back (I imagine) to what many of us first thought about when we came across tarot: 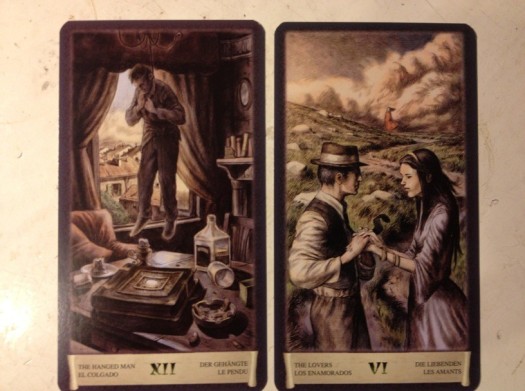 I think what I love the most about this deck is that it could have all-too-easily been done in the cartoony style that’s often common to Lo Scarabeo decks. But the illustrations by Michele Penco give fantastic depth and atmosphere, and evoke such wonderful emotions:

The most wonderful Judgement card ever?

It’s also important to point out that while Penco could have gone for the total gross-out (pretty easy to do, given the source material), most of the illustrations of “weird, creepy” figures also have an element of sympathy (or humour) to them.

(I’ve just realised that perhaps the guy in the six of wands could be the same one from the nine of swords…poor dude!)

It’s a haunting deck in all senses of the word; it’s able to stir up emotions that perhaps you never thought you had. It’s weird, awe-inspiring stuff. I think I’m really falling for it…

P.S. For another great review of this deck I heartily recommend Le Fanu’s thoughts at My Curious Cabinet.